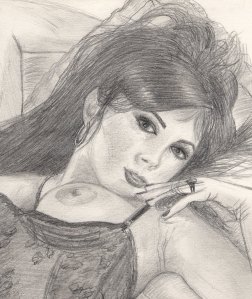 Okay, I know it’s not a stretch to work out what this is going to be about, but it’s only right that we have some fun with blog titles … right?

When I made the leap from short stories to novels, I didn’t have to be told that I’d need a break after each draft.

I needed a serious change of scene, and I found myself trying to write short stories, but my novel characters kept appearing in my head. I vaguely remembered reading that it helped to ‘rest’ the primary project.

Escapism to some people is Star Trek, Sex in the City, The Boston Chainsaw Massacre, or Gone With the Wind. Yes, escapism is many things to many people. I decided I wanted to write a genre that had no great interest for me with regard to my regular writing – but one where I might have a bit of private fun.

I wanted to write stories that would let me exercise, possibly even stretch my writing muscles, practise my characterisation, scene setting, imagery, dialogue, plot direction, pace, and so on. It had to be something that wouldn’t distract me by being too serious.

Why then did I start to work harder at erotica?

I could write a long, flowing, imaginative answer that still probably wouldn’t satisfy everybody, so let’s investigate the truth.

The truth is possibly stranger than fiction … and it goes beyond the straightforward.

A long time ago in a galaxy far, far, away, I left home as a non-smoking, non-drinking, non-swearing, quietly spoken, shy and retiring 17-year-old. It was the early 70’s, and over the next few years things were to change in spectacular fashion.

I had become a soldier. I was young, single, carefree, and lived in a foreign country. I smoked, drank heavily, swore … quite a lot actually, and turned violent at the hint of a threat. I lived a social life that frankly, I’m pleased to have survived.

I would usually be in the company of a few like-minded individuals. We might have screwed our faces up sometimes, or even shared a laugh, but as I remember, we continued to watch the action. Did I imagine myself taking part in it? Of course I did. We all did.

I didn’t have to watch that stuff – I had a choice, so therefore I must have chosen to do it. My life didn’t revolve around the subject, but it was omnipresent. Sex and all associated topics was a conversation that was never difficult to have in the company I kept in those days.

I’m a self-taught artist and have always enjoyed drawing the female form. I thought this was an appropriate article to decorate with drawings.

I’m not about to open up about my most intimate experiences, but let’s just say that at certain stages, it was emotional, enjoyable, and educational.

All of that was before I left my hedonistic lifestyle behind and married a decent young lady and settled down. I would become nornal. Enough said.

Now, zip forward several light years to around 2012. I had been writing a couple of years. I had memories, experiences, increasing confidence in my writing skills, and a need to draw all of those things together and create believable characters in believable situations, doing unbelievable things to, and with each other.

Why did I move on from writing erotica for myself?

The disappointment of that book caused me to ponder what else was out there posing as ‘erotica’, so over a period of time, in between other genre, I read different authors’ ideas of erotica. It was after about the fourth book in the genre, which I had paid for, that I decided I could do the job better.

I have always been recognised as broad-minded and prepared to accept people for what they are.

I don’t care if you’re white, black, yellow, or any shade in between. It doesn’t bother me if your sexual orientation is heterosexual, homosexual, transsexual, or a mixture of the aforementioned.
I know I could have used LGBT, but there are still some folk who would be Googling it.

I listed a few areas of the sexually-orientated story and then had a look at the fun stories I’d written for myself. Over a period of months, I blended the two.

Don’t worry if there is somewhere you have to be in a little while, I’m not going to list all of my reasons, but here are a few:
1. First of all an important reason – because I think I can do it.
2. It’s a challenge – and I do enjoy trying something different …
3. It’s a genre which creates a wide variety of responses from men and women alike.
4. I wanted to try another genre, but had tried and failed at writing a story for children – I went in the opposite direction to write specifically for an adult audience.
5. Not one, but three different writers asked if I’d ever considered writing an erotic novel.
6. I am not afraid to recognise when I’m not good at something, so if I make an attempt at this and my peers tell me I’m not good at it – I’ll leave it alone, but I will have tried.

What is my project?

The title is Give and Take. If I may use an appropriate metaphor at this stage, I’m aiming to make this story like a body. It will have a backbone, plenty of meat on the bones, a variety of senses and emotions, and will provide both pleasure and pain in varying measure. Oh yes, and it will be a naked body – I am not dressing this up.

It will not be a moral crusade, or a guide to good living, so at times the subject matter might give the impression that I’m insensitive to the pain and heartache of the real world of good and bad relationships. Nothing could be further from the truth.
(I did write a paragraph to justify myself here, but I deleted it, because it deflated this entire article.)
I write for many reasons, and I have a strong desire to write my new story – Give and Take.

Will my signature topic ‘retribution’ be in there?

Of course it will, but adapted, amended and exercised in ways I’ve never expressed in previous work.

You will find all the usual suspects in there: characters, locations, conflicts, sex, dialogue, detail, plots and sub-plots, sex, love, retribution, education, sex, and a few other things besides … Did I mention sex?

I will say at the outset that if you’re looking for a soppy romance with some titillation – this will not be for you. If you are a fan of the Fifty Shades trilogy and you have the faintest belief in the characters and situations – sadly, once again this is not for you.

If on the other hand you’d be happy to read a story that has been researched to a certain extent, albeit many years ago, that has some depth, and a mixture of emotions, laced with some graphic scenes, then you should enjoy the tale.

As always, I thank you for taking the time to read my ramblings and rhetoric, and for leaving any feedback.

I thought if you got this far, you might want to see the full version of one of my drawings from the 80’s.

Another one? Okay, but then I really have to go … 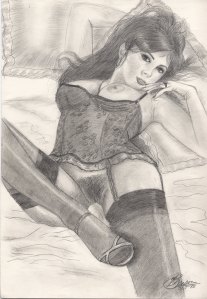 8 thoughts on “Fifty Shades of Blue”