is for – Cheetah, Coral Snake, and Condor.

The Coral Snake is well-known for its bright red, yellow, and black hooped skin. Several other snake species have developed a similar colour scheme to mimic the Coral Snake, which is useful because it portrays the non-venomous creatures as dangerous.

There is a rhyme used to remind people how to tell the difference. The rhyme is based on whether or not the red and yellow bands are touching. In more recent years it’s been discovered the simple verse is no longer accurate because of the impersonators.

An accurate, if slightly dangerous method of telling the difference is the bands on a Coral Snake encircle the body, as opposed to being an upper-body decoration.

In respect of the strength of its venom this creature is regarded as second only to the Black Mamba. 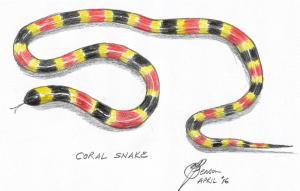 Species: One of few creatures which have two distinct groups before considering sub-species.

The first group are ‘Old World’ where there are 70 species.

The second group are ‘New World’ in which there are 15 species.

Size: They’re a particularly thin creature, some sub-species being as narrow as a pen or pencil. In length they may range from 15 inches to 36 inches dependent on species.

Habitat: The creatures are nocturnal. Old World species will tend to spend daylight hours underground or under leaf-litter. New World species would normally be found in rocky areas of desert, with a tendency to burrow, like most desert-dwelling creatures.

Info / Strange Facts: In many species, the Coral Snake has a black, bullet shaped head and, a black tail section, which means at first glance it’s difficult to tell whether you are looking at the head or tail. Like most snakes the tail is pointed, rather than bullet-shaped. Due the colour of the head it makes it difficult to see the eyes.

This snake is known to coil its head within its body and raise the tail when confronted, thus leaving a predator to attack the tail. The Coral Snake is more likely to avoid confrontation by slithering into a hole, or crack, or burrowing out of sight.