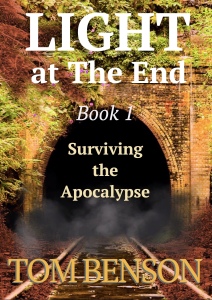 Bill Kane’s long military career was over, and a job as a bodyguard had recently ended, so he relaxed by joining a three-day sightseeing tour into the Scottish Highlands. At last, the ex-Serviceman would be able to leave stress and decision-making to somebody else, or would he?

While the squabbling of world leaders intensified on international media, Bill, like others, shrugged it off as sabre-rattling, but the sabres in question were nuclear missiles. An unthinkable situation developed rapidly. A missile was launched, and retaliation became an international chain reaction.

On a mountain road in Scotland, Paul Harrington a young coach driver listened to the news in disbelief. When his passengers returned down the hill from the latest viewpoint it would be Paul’s responsibility to get them to safety, but to where? No town was within easy reach, but he remembered a disused railway tunnel not far away. Could he get them there in time, and how would they survive?