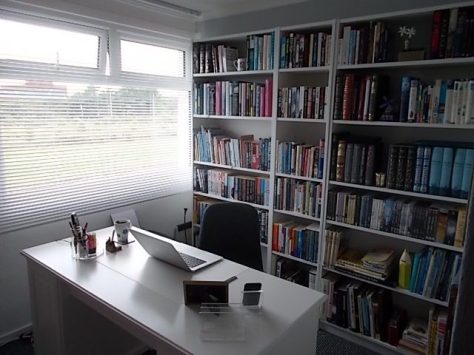 When the present year became a reality so too did several personal targets. As I tend to do, I had my year planner created, complete with weekends highlighted. A crucial difference to any other year was the month of October, when I’d retire from regular work.

I had considered changing from my PC to a Mac. As with all things I’d heard the positives and negatives for both systems which meant I had a lot of research to do before making such a big leap. Whatever I decided would affect my writing production.

It was my wife, Olive who suggested I should treat myself to a new look for my study. On several occasions after the idea was put to me, while working on a project I’d stop typing and stare at the wall in front of me.

We agreed it was affordable and settled on June as the month to do the makeover. I made a twenty-point plan and gave myself provisional dates for the individual phases. I’d be hoping to keep up with my writing with the exception of perhaps a couple of key days, like when the room was empty for redecoration, and assembling new furniture.

Now in the first week of July the main task is completed. In the near future I’ll add a potted plant or two, but I’m now ready to learn how to use my Mac – and I’m eager to be writing again.

I took a few ‘before’ pictures and ‘after’ pictures but I believe it only needs one to demonstrate that the effort to make the changes was worthwhile.

Until I sat here with my Mac at my new, larger desk in the centre of the room I didn’t realise how trapped I must have felt previously.

The stage is set to get back to work, so what lies ahead in my personal targets for the year?
I have the final edits to perform on Highland games – 4 before publication. By the end of this year I propose to publish Highland Games – 5 and A Life of Choice: Part Five, and both books are at an advanced stage. 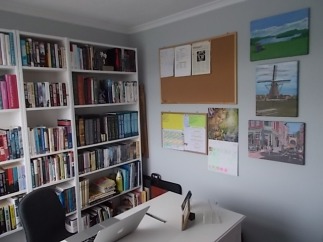 My next novel is underway and will continue to be developed over the coming months. However automated, updated and organised my desk feels, I enjoy the comfort of a notice board which keeps me in control.

As always, I thank you for taking the time to visit my blog, and for any comments or feedback you may leave.

Eric Lahti, a fellow author, blogger and member of the Indie Author Support and Discussion (IASD) group on Facebook issued a challenge.

Produce a short story of 1,000 words or less inspired from a choice of supplied graphics.

My response is ‘To Go Boldly …‘, a story of desire and duty.

“Jim darling,” Penny Kirk said, her eyes misting. “Please be careful out there.”

“Don’t worry love, her husband said. “I’m equal to the challenge, and you know I must push myself or I can’t get through the day.”

“I think 25 years with the New York Police Department proved what you’re capable of, so you need to learn to take it easy.”

He leaned forward and kissed his wife. “I’m not with the NYPD anymore, so I can’t understand why you worry so much.”

“You might not be, but you’re one of the only independent Extra-Terrestrial Investigators in the country, so I wish you’d join a government team.”

“I’m onto something this time Penny,” he said, his eyes gazing into those of his loving wife. “I promise if nothing comes from this theory tonight, I’ll apply to join the government team out in Phoenix, okay?”

“Okay darling, but I’ll still worry until you come home.”

“I know, I know,” she said, and the promise always lifted her from her morbid mood about her husband’s obsession.

“If you ever disappear I have to ask James Jnr to swear to carry on your full names in the family line.”

He nodded. “That’s my girl,” he said and reached out to touch a framed scroll near the door. He winked at his wife, lifted his overnight bag and was gone.

Penny sat at the breakfast bar next morning drinking a black coffee. She stared at the scroll her husband had fitted on the wall beside the main door the day their son was born, and dimples appeared in her cheeks.

James Jnr had already left for school. Before leaving, he’d kissed his mother, and then as he’d left the house he’d touched the framed scroll and looked back at his mother with a broad smile. “I’m real proud of Dad, and I’m gonna be just like him.”

Penny lifted the remote control and flicked to the news channel.

‘This is Cathy Soames from NYRTV reporting from Central Park.’ The young blonde stepped back to allow the cameraman to pan around the area, and the broadcast continued.

‘It was on this bridge in the early hours of the morning when a bolt of lightning struck the bridge. There had been no rain, thunder, or lightning previous to the unprecedented broad flash of bluish-white light. Two eye-witnesses were sleeping rough in the park, and both said they recognised a man who’d been standing on the bridge prior to the flash.’

A photograph of Penny’s husband in NYPD uniform took up half of the screen, and alongside it, a recent newspaper article showing him with a large telescope.

Penny Kirk was unaware of the coffee dripping over the breakfast bar until it spilled onto her bare legs. As she listened to the reporter, the words became a mumbling message, and the TV screen blurred as tears filled Penny’s blue eyes.

The doorbell disturbed her plea to whosoever or whatever controlled these things. She went to the door in a daze, not bothering to deal with the damp front of her coffee-stained dressing gown. She opened the door and stared at the two uniformed officers.

“Hello ma’am, I’m Patrolman O’Brien, and this is Patrolman Jefferson ….”

Jim looked around his sparse but comfortable accommodation, and before leaving looked out across the vast complex of the Space Academy to the new ship. It was built near the academy so it would serve as an inspiration.

The magnificent craft was completed and awaited the crew – a select bunch of highly trained people who were prepared to tackle a five-year long mission into the unknown. They would be led by the youngest captain in Earth’s fleet.

Jim stopped at the door and gazed at the glass-framed scroll which had been handed down through generations. For the first time, he read it aloud.

“James means supplanter – the one who replaces. Tiberius was the strong Roman Emperor who ruled for over 20 years. Kirk, a family name derived from the ancient Church of Scotland, and earlier from the Greek for Lord’s House.”

“I will make you proud,” The captain said, as he gently placed a fingertip on the frame in the way he did every day. “I’ll strive to make you as proud of us, as we’ve all been of you.”

Jim placed his hand over his heart as he read the request at the bottom of the 280-year-old scroll, ‘Please bear this name with pride, remember the full meaning of your inherited name, and be prepared to go boldly toward the future.’

It’s not a book and it’s not a website, or even a single location. I’ve been on holiday for the past week and as I usually do, I tour the area extensively.

Being on holiday is a good source of resource for readers and writers as I aim to highlight in this post.

What specific resources are there?

2.  Keep your camera handy. Seeing wonderful sights is all part of being on holiday, but to remember them clearly, and the ideas they provoked – take some pictures.

3.  Tourist Information. The classic holiday source for information whether at home or away. Maps, pamphlets, locations of places of interest, books and of course the staff. Talk to people who know the area.

4.  Museums of whatever size or type usually have a selection of books and leaflets. In those locations there are usually maps and guides to the local area.

5.  Accommodation can be a great source. I tend these days to hire self-catering accommodation and once again I’m living in an old stone cottage. A local village, a forest, mountains and a loch all within a few minutes walk make this an exceptional location, but you can find inspiration in any area if you look.

6.  Open eyes, open mind and active imagination are all at our disposal. It doesn’t matter if we are continuing with our regular life or if we are on holiday – we will find inspiration if we are open to it and look for it.

Time to go now, because I can sense a day of inspiration calling to me.

I’ll be on blog patrol as soon as I’m back in my usual writing location. Thank you for dropping by.

A couple of days ago, I constructed a new section in my website, titled: Tea, Breaks, and Inspiration, which at first glance might cause the casual observer to question the relevance to writing or art.

Whilst out and about, whether on a shopping trip, a day away, or on holiday; I always carry a notebook and pen. Yes, always. Some passages in my novels and short stories were born during a tea or coffee break, either when out for the day, or on holiday.

A camera is useful, especially if on your phone, as I’ve discovered since buying my first Smartphone a few weeks ago. I have also been known to use a digital voice recorder. Having said that; I’m still convinced that nothing works quite as well as a few well-chosen words in a notebook.

You can be imaginative, or you can use Google and Wikipedia, but nothing captures the atmosphere, architecture, and general feel of a museum or other location, quite like the written word, dealt with, right there on the scene. On the odd occasion, I’ve been visiting a city and stopped for a few minutes, to write down what I see. People, vehicles, buildings, and the occasional snippet of conversation can be noted.

When I’m sitting with my tea or coffee in front of me … and piece of cake of course, I look at my brief notes, and top them up with a little information. I believe ‘real’ research gives creative writing an authority, and that can only come from the confidence of the writer.

What are you waiting for? Get your notebook, and go out for a while.

A 'watering hole' for readers and fellow writers – help yourself