I finished writing Dark to Light: Light at The End – Book 3 recently. I reminded myself that it was the easiest phase. Having said that, I’ve now also completed the first full edit, which as any author will tell you can be a mind-boggling task.

You would think that having written a trilogy and two mini-series I would sail through completion of another trilogy–not so, and I don’t believe it should be easy.

Occasionally, when an author sets out to write a story, apart from the desire to create a new world where they have complete control, it’s sometimes not clear if the tale has ‘legs’. By this, I mean that in the early, exciting stages the idea might be to write a trilogy or a series. These multiple titles create an opportunity for an in-depth and ongoing tale with a cast of impressive and well-rounded characters. Authors must always remember that some story ideas don’t have the ‘legs’ for a trilogy.

What happens if the story doesn’t have ‘legs’?

The honest answer is, it becomes a book. Yes, it’s that simple. Any decent author will know as the plot unfolds whether that daydream of a saga with those interesting ideas was simply that–a daydream, and not a great prospect for a longer story.

What happens if the story does have ‘legs’?

Ah, now we’re getting back on track. In this case, the author will get underway with the tale and enjoy developing the plot, the scenario and, of course, the characters. This is what happened for me with Light at The End: Surviving the Apocalypse. My head buzzed with ideas and characters were falling over themselves to be involved. Some of the people I considered never made it beyond the first auditions. That’s showbusiness.

This particular story was intended to be a single book, an attempt at post-apocalyptic fiction.         I had three main things I was aiming to do with my glimpse of a world after Armageddon.

Firstly, I wanted to portray the effect of survival on a disparate bunch of people who were thrown together and would be trapped by circumstances. Secondly, I wanted to do it without the use of zombies or any other ‘undead’, which seems to be a pre-requisite for some authors of the genre. Thirdly, I wanted to involve and explore the use of the ‘Hollow Mountain‘ and the hydro-electric power station created and operating from within.

When did I know my idea had ‘legs’?

Surprisingly, this happened about halfway through the first book. I invented two people in personal situations which are poles apart. The interaction which evolved in both cases when these two individuals entered the story was the turning point. I expanded my brainstorming sheet, which is something I create for all of my stories. I knew that if treated properly, the concept had the capacity to be bigger than I’d first intended.

Did I know it would become a trilogy?

No, and again, the reason is simple. I had to wait for the response to my initial tale. For example, the cover didn’t have ‘Book 1’ added until recently. Most of the feedback was good but there’s always going to be a zombie fan. 🙂 At this point, things changed slightly. I felt that I’d accomplished something with the first book and I’d absorbed so much background information which blended with personal experience and this was indeed a story with ‘legs’–a trilogy.

Light to Dark: Light at The End – Book 2 was a tale specifically written to explore how far people might go when they’d come to terms with their ‘second chance’ and gained confidence. I believe it’s a plausible follow-up to the opening story and not a filler. There are extensions to the plot, further adventures, and character development, but for me, it had to feel that there were a natural progression, entertainment, and a satisfying ending. 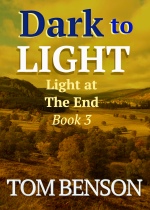 I’ve thoroughly enjoyed the journey, and as I develop and polish the third part with many more drafts and in time send it out to beta readers, I’m feeling good about that initial daydream and my three aims for the story.

Dark to Light: Light at The End – Book 3 will be available in early November 2020. 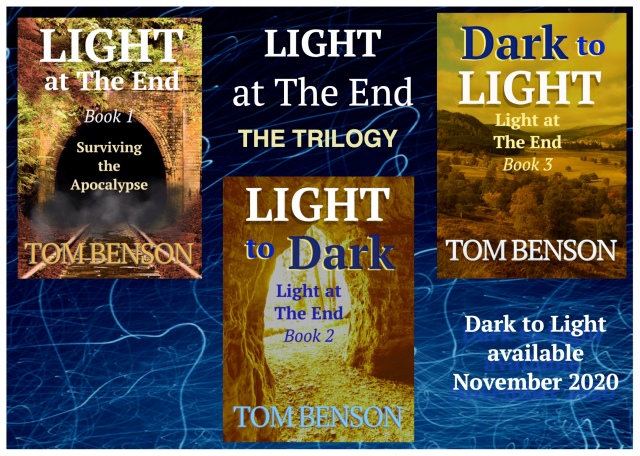 Thank you for any comments and suggestions.

A special place exists in my heart for this story for many reasons, but appropriately, it means a lot because it was my first attempt at romance.

I’ve spent a month working on the manuscript to convert it to a paperback. Fortunately, now that I’m retired, a month in writing terms doesn’t mean every odd hour I can squeeze in—it means an average eight-hour writing day; every day.

Why so long for a simple task?

Any author who has performed such a task will know the change from digital format to paper would normally be a case of rearranging the front and back matter. This story had already been subject to two makeovers since the original version in December 2013, but it needed a total overhaul.

The new version will have the same cover but with a revised strapline.

As in all aspects of life I felt I had evolved sufficiently as a writer to appreciate where I had got it right, and crucially—where I’d continued to get it wrong.

What’s different in the new edition?

My first pass was to print the manuscript and perform a brutal red-pen edit on hard copy.

Judging from many comments on Facebook and recent reviews, my style has changed, or as I like to think; improved.

a) I removed most of the dialogue tags and replaced them with character activity.

b) I amended the sexual scenes from what was bordering on ‘erotica’, and reduced it to ‘steamy romance’. For the most part, it is now closer to ‘romance’.

Suffice to say it’s been quite a journey. The characters continue to enjoy the story, but they’re subtle in what they tell the reader about their private moments together.

Okay, so why did I ‘reduce’ the level of sexual matter?

There were a number of reasons, but mainly, it didn’t belong. The story is a romance and not intended to perform the same role as strong erotica. As with a couple of my books I’ve been fortunate in hearing from readers privately, and more than one was concerned by explicit sex.

I enjoy writing in a wide variety of genre and just as I like to have guns, explosives and fights, I also like to write about tenderness, relationships and let’s face it—sex.

On the subject of releasing things, Ten Days in Panama (revised April 2018) is now available in eBook, and the paperback will be available within the month.

I’ve remained true to the original story with regard to character development and the plot.

It would be wrong not to say a public thank you to fellow author and distant friend, Carmen Lopez (author of Alone: and other short stories). We became acquainted through reviewing each other’s poetry on an international poetry site. I moved on into the world of short stories and novel writing, and Carmen performed the duties of being my first beta reader.

The inspiration for Ten Days in Panama evolved from learning about Carmen’s profession and where she lived. Indeed, the first cover for the book was designed by Carmen’s partner, Bryce.

For anybody who is now so excited that they can’t wait for the paperback, here are links to the digital version of Ten Days in Panama:

Thank you as always to those who stop by.