I can say with confidence that I will never apply as much effort to any other writing task as I have to ‘A Life of Choice’.

It was 49 years ago this week when I left home to start basic training with the British Army. My military career ended in 1992, after 23 years, and it was a couple of years later when I gathered information towards writing about that career as military memoirs. It would take many years before I’d gained sufficient writing knowledge and skill to produce an entertaining tale.

I tried the fact-based route first, both in the first-person point of view and in third-person. The end product was massive and carried far too much detail—it went into ‘storage’.

When I’d successfully written and published thrillers, romance, short stories and poetry, I turned once again to my magnum opus. I toyed with fact or fiction, and viewpoint. My choice was fact-based fiction, written in the first-person point of view.

By 2016 the first of five parts was published and was well-received. As each part went out, the reviews continued to be positive, so I sidelined my other writing projects. I still tried to read, review and help my peers with their projects. Apart from public reviews on my new series, I started receiving private messages via my author website—mainly from ex-soldiers (male and female), who wanted to pass on their gratitude for the accuracy and humour. Most of these guys were not comfortable writing public reviews.

My only concern was that many serving and ex-service personnel were not e-reader users and I have regularly received requests for a paperback version.

1. Perform a complete rewrite to tighten dialogue and deal with minor amendments.

2. Break the story to balance the chapters and create a consistent ‘volume’ for each of the five parts.

3. Select the appropriate places to break the story to make a paperback version as a trilogy edition.

5. Compose a disclaimer which could be used with internet marketing blurbs and within the books regarding the different editions having the same content overall.

6. Select excerpts from reviews to use on the back covers of the trilogy.

7. Build a catalogue of information to educate my book cover designer regarding the ideal graphics solutions. This was difficult because anything available now in photographic evidence is very different to the equipment I would have known in the ’70’s, ’80’s, and early ’90’s. We persevered, and the trilogy covers feature equipments which were landmarks in my story.

As I’ve done for my novels, I hired the talents of Aimee Coveney of AuthorDesignStudio–a designer who works tirelessly until the solution meets customer satisfaction.

8. Organise the sequence of publishing—all five amended eBooks and the trilogy, only when I had the bespoke covers for the trilogy.

9. Create graphics to market the two editions separately and together.

10. Prepare my author website and this blog for when the new trilogy went public. 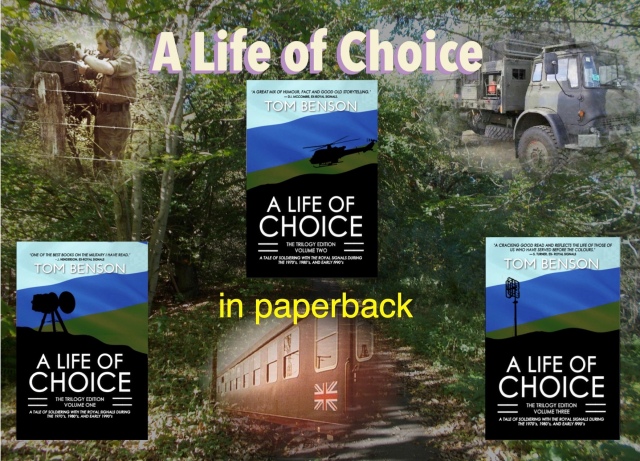 I commenced this renewed labour of love in June 2018. Once again, apart from helping other writers on individual projects, and managing a major task for the Indie Author Support and Discussion group—most of my efforts went on the conversion process.

How did I relax when it was getting intense?

Several times I pulled out one of my erotica projects—as difficult to write as any other genre, but light relief in terms of content. Occasionally I’d draw, paint, or read, but not as often as I wanted because I felt a sense of guilt for not ‘working’.

In mid-October, I completed the conversion of five eBooks into three paperbacks. It was around 7th November, when I completed the final formatting sequence for the revised eBook versions … and then I had another coffee.

The pricing of the paperback trilogy is more than I’d have wanted, but I reconcile my concerns knowing that each book is around 570 pages. It was vitally important that nothing was removed from the story.

Amazon UK – for the paperbacks

A Life of Choice: Part One – The Trilogy Edition

A Life of Choice: Part Two – The Trilogy Edition

A Life of Choice: Part Three – The Trilogy Edition

A Life of Choice: Part One – The Trilogy Edition

A Life of Choice: Part Two – The Trilogy Edition

A Life of Choice: Part Three – The Trilogy Edition

Who might find an excerpt from their reviews on the back cover of my paperback trilogy?

Apart from review excerpts by a selection of ex-Royal Signals personnel, and an ex-Army wife, I opted for snippets from fellow authors, namely: Frank Parker, Barbara Fagan Speake, Paul A Ruddock, John MW Smith, and Paul Rees—notably, all fellow members of the IASD.

Thank you for taking an interest, and passing a few minutes with me.

A Life of Choice is fact-based fiction, presently available as a five-part novel for Kindle. The story is the most popular title in my catalogue.

If my first attempts at this tale were included, A Life of Choice has been a work in progress for about twenty-two years. On the other hand if we were to treat my military service as research for the story—it goes back to forty-eight years.

Whatever else I published it was always important to me that I completed this project. It was heart-warming to see the first reviews from serving personnel and ex-Service personnel, of course, but to see glowing reviews from readers who’d never donned a military uniform—gratifying.

As with all of my writing, it was never my intention to publish in paperback, but like many things, I’ve decided to change course and take that step.

– Since the first part was published as an eBook (two years ago), I’ve had requests to produce the story in paperback. There are many people out there who either have difficulty using a digital reader, or simply prefer a physical book.

– It will give me the opportunity to use the paperback version as a gift, or on occasion a ‘prize’ in draws for various military charities.

Do I expect to make a profit from sales of a paperback edition?

– I don’t write to make money, which I like to think is reflected in the price range of my eBooks. My titles are competitively priced or they wouldn’t be treated seriously.

– By the very nature of indie paperback publication the individual books are expensive when compared to availability of the household names in any supermarket or bookstore.

– I’ve created the covers for my eBooks with a few exceptions—those being designed by a professional cover designer.

– This series will have covers created by Aimee Coveney of Author Design Studio.

What’s going on with the ‘Five into Three’?

I produced the story in logical parts to publish as eBooks, but the individual books would not justify the price set by Amazon for paperback versions—in my opinion.

Due to the the process and use of the data provided by the author, the Amazon KDP system requires exact information when relating an eBook to a paperback. I’m taking a risk, but trying to think outside the box.

– For the paperback version, the series will be broken into three parts. They will still be ‘logical’ parts, but of greater substance than their digital counterparts.

– To ensure the job is done properly I’ve spent many hours selecting where to move chapters from one book to another in order to adjust overall length. This has entailed amending the Preface and the Epilogue in each part.

– As I did with Amsterdam Calling, and Ten Days in Panama, I am underway with a complete revision of the story. The tale will remain the same, the humour or more serious aspects will stay in place, but the writing will be tighter. I will also be adjusting the use of uppercase letters for certain instances.

– Instead of associating the paperbacks directly with the eBooks within the Amazon system, I will sub-title the paperbacks as The Trilogy Edition. I’m in the process of writing appropriate jacket blurbs to highlight that it is the same story but in a different format. This will also forestall any conflict with Amazon and their ‘Matchbook’ process.

Will the updated writing have a detrimental effect on the eBook version?

I will be using the rewritten chapters from within the paperback manuscripts to replace the chapters in the appropriate eBooks. In this way, the writing is updated but the front and back matter of each book remains constant.

How will I prevent issues with the publication of the ‘original’ and ‘updated’ editions of the eBooks?

I will prepare all five eBooks and update them in one session so that they’ll become ‘live’ on the Amazon system within hours of each other.

How will I ensure that ‘The Trilogy Edition’ paperback version is seen to be the same story?

– I will not publish any of the paperback versions until I have all three completed.

– As with the eBook updated versions, I will publish the three paperbacks in a single session, aiming for them to appear within hours. Paperbacks are not purchased as rapidly or frequently as eBooks so there isn’t as much pressure on timing.

– A Life of Choice: The Trilogy Edition – Part One is completed.

There you have it, people.

In my next post I’ll report on how things are going with my conversion of five into three, and I’ll explain why my eBook publishing plans for this year have been altered.

As always, I thank all of you who take the time to visit and read my blog.