What could be better than a new year and a new start? 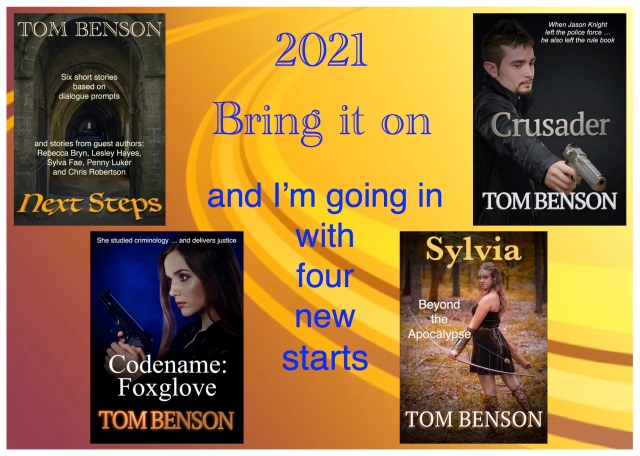 I’m aiming for four new starts and they are on an equal footing as I get underway. Let’s see what the line-up offers. The first is a collection of short stories, for which I have writing prompts as my inspiration. The second is a vigilante who is the new face of summary justice in a world that my readers know well. The third is a spinoff to tell an unusual single character’s story. The fourth may not have any background material, but he’s as real to me as the next person who walks down the street.

is an invitation anthology of short stories. For this collection, I requested any authors in the Indie Author Support and Discussion group (IASD) to supply me with a writing prompt. The prompt was to be a dialogue between no more than two characters and to be no more than thirty words. I will write six short stories (attributing the prompts appropriately). The authors themselves will submit one or more short stories, and their website links for inclusion in the anthology.

is a crime thriller sequel to Codename: Nightshade. It means, of course, that Rachel Donoghue will be back on the scene. This story will see the development of Dominique McEwan (Foxglove) who was introduced in Nightshade’s story. Members of the original Beyond The Law team will make appearances, and so too will secondary characters from the Nightshade tale.

Sylvia: Beyond the Apocalypse is a spinoff from Light at The End, my popular, zombie-free, post-apocalypse trilogy. When my foray into a refreshed world captured the imagination of readers and produced good reviews, I knew I’d have to tell this character’s story.

is a crime thriller. The inspiration for the main character and the story came from one of the tales in my latest anthology, Shadow: and other stories. I like Jason already and I have written the first chapter. The lead character will no doubt have a few ideas too.

Is there anything else on the cards?

I’ll be reading regularly, just as all authors should, and I’ll be reviewing. I expect to be beta reading for members of the IASD.

Yes, a story was started early last year but due to being written piece-meal in the background, it became unwieldy. When the final draft is completed it will be broken at a logical point and published as a two-part tale.

If you’d like to see how my three new novels are shaping up, the first chapter is available for each on the WIP menu.

And now, without further ado, let’s get this literary year underway.

You’ve written a great story. Do you need sex amidst the guns, fighting and mayhem, the psychological trauma and mystery, or the tenderness and promises?

When I say ‘do you need sex’ I’m obviously referring to the requirements of the story—not your personal urges. I digress … .

This blog post was born from the need to offer my opinion on a regular comment I see on social media, and if we’re all honest, it’s getting a bit tedious. The comment usually follows similar lines to: ‘… and when I reach a sex scene I move on …’

There is usually a bit more to it, but in essence, we have two main areas to address.

Question 1 – Is the reader a prude, or simply someone who knows when a sex scene could have been done more tastefully—if it were needed at all?

Question 2 – Did the author make a mistake by getting carried away, drifting from the primary genre, thus adversely affecting the plot of the story?

The answer to Question 1 is not as simple as it sounds. For some readers, if an author goes beyond: ‘… she stood with her back to the door and raised an eyebrow …’ it’s too much. For others, it’s frustratingly brief, and they want to at least know if one person is wearing matching underwear and if the other person is wearing underwear at all.

Now, Question 2 throws up a whole new dilemma. As authors, it is not simply a personal choice, but in my (humble) opinion, it is our duty to remain true to our craft. No, I’m not getting high and mighty because I’ve written more than two books—I’m simply telling it like it is. The reputation of indie authors is being destroyed from within by some people with low standards. Those of us who work long hard hours and go beyond the first draft must persevere to produce the best we can.

You cannot refer to yourself in your branding or promotional material (of whatever level) as a thriller writer if you have the main character kill someone and then for the rest of the book he/she beds every other person in the ‘adventure’. You can dress it up, or undress it if you wish, but one of the aims of any author should be to focus on the job—in this case, a good story based on the primary genre.

I write a wide variety of genre and among them is erotica. I may allow a kiss or a caress—even partial undressing in some stories but graphic, no-holds-barred sexual activity is kept for my erotica.

If an author writes thrillers, westerns, sci-fi or other genres there ought to be sufficient time invested in character development, dialogue, imagery, pace and the accurate choreography of action. Any mention of sex will usually be incidental, except, of course, for romance, some paranormal and fantasy where it may go further.

An author who writes erotica is not out to shock—they are aiming to indulge their readers in the type of material they sought. This is not to say that character development and those other ingredients I mentioned earlier are not required in erotica—they are just as important. The erotica author must avoid sex becoming the ‘story’; an opportunity to be self-indulgent with repetitive and meaningless scenes of gratuitous carnal jiggery-pokery (mainly pokery).

In my ‘mainstream’ genres, there may be terms of endearment, a kiss or an embrace but they are strategically placed. Occasionally, in my erotica, there is less need for such romantic overtures, activity or subtlety. The characters might be more interested in mutual physical gratification than an emotional rollercoaster ride but there will still be character development and the activities are created with a purpose. It depends on the story.

I believe the author should strive to be faithful to the principle genre and whatever extended subjects it entails whether it be an action-packed or psychological plot, and plot or character-driven.

If you’d like to see ‘erotica’ as it once was, read ‘Lady Chatterley’s Lover’. Like most other genres, erotica has moved on and readers are no longer satisfied with what was once considered shocking—people want to envisage themselves in scenes which will (in most cases) forever be a fantasy. With the greatest respect D.H.Lawrence, move over my friend.

I’m a great believer in the use of metaphor if it spells something out clearly. I’ll summarise with two questions to authors who are trying to work out if sex ought to be highlighted in a story?

Would you wear flip-flops and boxing gloves to run a marathon, or perhaps mask, snorkel and flippers to ride a bicycle?

Thank you for reading, and any comments.